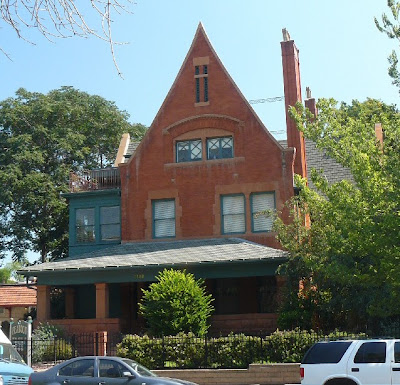 Before you read on, let me share with you that I'm still in hiatus while I try to keep food on the table. I know that many videos are dead but they'll have to stay that way until I figure out a way to work and blog at the same time.

Meanwhile, I'm still here and somewhat try to keep abreast as to what's going on in the paranormal.

CHEVY CHASE, MD (February 8, 2012) – Travel Channel returns with season six of the popular paranormal travel series, “Ghost Adventures” on Friday, March 9 at 9:00 p.m., ET/PT. Investigative duo, Zak Bagans and Nick Groff, along with equipment technician Aaron Goodwin, explore some of the most haunted locations in America to unearth the trapped souls and dark energy within. This season, the team visits spots that have never been explored by the Ghost Adventures team including the Peabody-Whitehead Mansion in Denver, CO, the Shanghai Tunnels in Portland, OR, as well as the family home of paranormal equipment inventor Gary Galka in East Granby, CT, where business gets personal as they help one family make contact with their dead daughter in a deeply personal story of love, loss and a haunted house.

Each of the nine half-hour episodes starts with an in-depth profile of a location’s haunted past. Once the story is told, viewers follow the investigative team as they survey every nook and cranny while conducting scientific experiments while being locked down overnight.

“Ghost Adventures continues to attract huge audiences for the Network and has a growing appeal to travelers who seek a different type of thrill and adventure,” said Andy Singer, SVP, Programming and Production, Travel Channel. “Zak, Nick and Aaron have built a dedicated fan base that seem to follow their every visit and tweet, and are inspired to visit many of the destinations featured in their show.”

The new season kicks off with the trio as they head to Denver, CO to explore the historically haunted Peabody-Whitehead Mansion. Built in 1889, its first owner Dr. William R. Whitehead was convinced the building was plagued by the spirits of hundreds of soldiers he tried to save from his days as a surgeon for the Confederate Army during the United States Civil War. After his death, when controversial Colorado Governor James Peabody moved in to the mansion, things only worsened. The governor was viewed by many as the enemy of the working man and in 1904, the Governor ordered state militia to break union strikes by the region’s gold miners by brute force. Hundreds were injured in the violence, and dozens were killed as their bloodshed was on the governor’s hands. All the years of torment are now trapped inside this now empty Grant Street mansion. In addition to being the site of a suicide, there have been over 120 years of ghostly activity in the building including reports of visitors being pushed up against the wall by unseen forces!

UFC Fighter Brendon Schwab joins the trio at the Peabody-Whitehead Mansion in hopes to shed some light on the evil entities in order to learn more about the darkness that lies within the walls of this historic location. During the investigation in the basement, it gets personal when a spirit calls out Brendan by name, and then reveals new evidence about an unsolved crime. This turn of events triggers the involvement of the Denver Police Department – currently reviewing the “Ghost Adventures” team's evidence.
Posted by Atrueoriginall at 1:35 PM