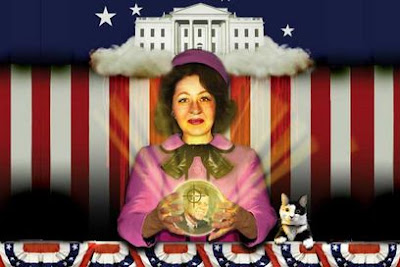 Of course you are dying to see Jeane Dixon's crystal ball first. And here it is. It made the trip to the auction house in someone's lap and then was placed in an illuminated vitrine for safekeeping. It was the celebrated seer's most powerful tool, or prop, if you don't believe in soothsaying, astrology and other hocus-pocus.

But so many do believe, and that's why we're here at Sloans & Kenyon Auctioneers and Appraisers in Chevy Chase, watching them sort through 500 boxes of Dixon's worldly (and otherworldly) possessions, which just arrived on five trucks.


Dixon, who died in Washington in 1997, was at one time the most celebrated psychic in America, if not the English-speaking world. She was also a fixture in Washington, a grand doyenne who corresponded with presidents and was one of Nancy Reagan's astrologers. She grew wealthy as a nationally syndicated columnist and author of seven books. Her most famous prediction was the assassination of John F. Kennedy. (Okay, she also said that we would be in World War III with China in 1958 and that we'd have a female president by now.)

Posted by Atrueoriginall at 3:10 PM