WANT TO SEE THE GHOST HUNTERS LIVE? SEE DETAILS INSIDE 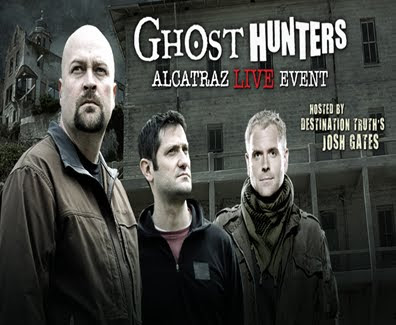 Want to help Syfy's Ghost Hunters find spooks in Alcatraz? Well, you can't do that, but if you live in New York, New Jersey or Connecticut, you can join them and host Josh Gates for a live broadcast of Ghost Hunters: Alcatraz Live Event on March 3.

Attendees must commit the entire duration of the event as the studio audience is a key element of the show.

Seating is limited, and is only reserved on a first-come, first-served basis.

To attend, please enter your name, phone number and email address in the form here as soon as possible.

Only residents of the New York Tri-State area (New York, New Jersey, Connecticut) are eligible to attend this event. No one under the age of 16 will be admitted. Photo ID with birth date is required for all guests. Audience members must comply with all security procedures.

Please do not bring any unnecessary baggage or electronic devices, including cameras, backpacks and large shopping bags. Small purses are permitted.

Want to see the Ghost Hunters live? Here's how.

Posted by Atrueoriginall at 6:35 PM