Tune in Friday at 9 p.m. ET for an all new Ghost Adventures 12 hour paranormal lock down. This week the team is investigating the Old Idaho Penitentiary. Also Zak, Nick and Aaron will be chatting live at 10 pm ET after the show. 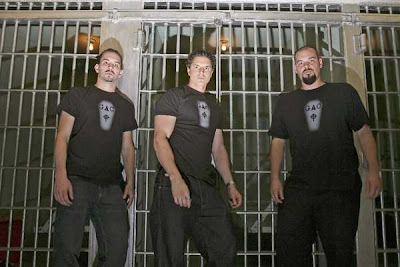 History is full of good stories: tall tales, yarns, legends, myths, and yes, ghost stories. If you wanted to go looking for them, the Old Idaho Penitentiary would be a good place to start.

That's what the hosts and creators of the Travel Channel's "Ghost Adventures" said earlier this month before they locked themselves into the historic site to investigate rumors of paranormal activities.

"We try to find a lot of dark history and dark hauntings because we do a little provocation to entities that are not nice, evil," said Zak Bagans, lead investigator for the "Ghost Adventures" team. "Some of the guys who did hard time here, I'm sure, were not very nice. They're probably going to fire back at us and we may get good evidence, but it can get dangerous."

The Old Pen housed more than 13,000 inmate from 1870, when it opened as a territorial prison, to 1973, when it closed. The Old Pen is on various Web sites that list haunted places around the country.

Although there is no documented evidence, stories of apparitions, strange rattling, wails and other spooky noises persist, said Janet Gallimore, executive director of the Idaho State Historical Society.

"It was a prison, and people died here," she said. "So there are plenty of opportunities for interesting stories. There is no proof, but we know this is something that interests the public, and many people have come out to investigate the paranormal here."

The GA crew arrived in early October to film what will be the finale of their first season on the Travel Channel. You can watch that episode on Dec. 5.

Bagans, well-muscled with a subtle East Coast accent, has black hair thick with gel and a touch of goth-esque blue/black lipstick. He and his crewmates, Nick Groff and Aaron Goodwin, dress in black and wear their GAC (Ghost Adventures Crew) logo prominently.

It is an affected look, but it doesn't diminish their sincerity in their belief that ghosts and other things that go bump in the night are real.

"Before I die, I would love to see a headline that reads 'Government scientists have authenticated that ghosts do exist,'" Bagans said. "I know they exist. Nick and Aaron know they exist. We've all (everyone) had experiences."

"That's why we're out here, because people have a right to know."

On an unseasonably warm and sunny fall day, their garb looks out of place. The site, with its rose gardens, looked almost cheery. Almost. Six inmates were hanged in the rose garden. These guys may find more than they bargained for, or at least that's what they hope for.

Bagans, Groff and Goodwin locked themselves in the Old Pen with cameras, night-vision goggles, gadgets that measure electromagnetic fields and their courage.

They will concentrate some quality time on Building 5, which was built in 1954 and housed the most hard-core criminals. It contained the prison's death row and an indoor gallows where notorious murderer Raymond Snowden was hanged.

Snowden, called "Idaho's Jack the Ripper," brutally murdered a woman in Garden City. There is a 15-minute gap between the time officials slipped the rope around his neck on Oct. 18, 1954, and when he fell through into the "drop room" beneath. The two physicians who were on site disagree on the time of death. That's the spirit they're after, Bagans said.

"I heard he hung there for 15 minutes," Bagans said. "I know I'd be pissed off if that were me. So we're going to try to get a reaction out of Raymond. He and I are going to become friends."

Snowden also is reported to haunt Hannifin's Cigar Shop in Downtown Boise. Bagans and the crew take a different approach from other observation-type paranormal shows. They're a bit more aggressive and taunt the ghosts, Groff said.

"We've been hurt before. You'll see it," Groff said. "We actually had to go see an archbishop. It's no joke. People think this is stuff you only see in movies, but this stuff is real. Once it happens to you, it opens your mind up big time on a view of life."

Bagans and Groff both had close encounters when they were younger that changed their thoughts on the paranormal.

Bagans lived in what he describes as a haunted apartment in Trenton, Mich., a few years ago, where a woman would scream out his name at 3 a.m. Up until then he had been a skeptic when it came to ghosts, he said.

"Finally on the seventh night, she woke me up again, and I was paralyzed for about 30 seconds. Then I flipped over and saw the silhouette of a woman at the foot of my bed. It was like a jolt of electricity ran through my body. When I turned on the light, no one was there. That experience changed my perception of life."

Groff lived with the specter of a man he would see in his family home.

"That would make me run out of the house. After a while I closed off my mind to stuff like that. Then, when I got older, I became more and more intrigued."

The two met in Las Vegas and decided to team up and make a documentary about their no-nonsense approach to spirit hunting. It aired on the Sci-Fi Channel and became a cult hit.

Shortly after that, producers at the Travel Channel held an "emergency meeting," to try and secure the show. You can't beat a good ghost story for sheer entertainment value, said Charlie Parsons, who became the show's executive producer.

"People are always up for a good fright and just want to be entertained and get goose bumps, and lot of people are believers," Parsons said. "This show tries to offer something for both of them."

It is an entertainment genre that has been around since the medium was young. Think "Twilight Zone," "Night Gallery" (which is back, by the way), "Tales From the Crypt" and "Ghost Whisperer."

Reality shows like "Ghost Adventures" and "Ghost Hunters" are on the new end of the spectrum.

"There is no question that this genre is exploding," Parsons said. "The public has a growing appetite for these paranormal shows."

The romance of ghost stories and their connection to history is not lost on the Historical Society, said Idaho state archivist Rachel Johnstone, who put together the state's new database on Old Pen prisoners.

"It's a kind of popular history," she said. "It doesn't matter if it's true or not. Ghost stories are a valid part of Idaho history because that's the way people interpret their experience, and you have to keep an open mind."

Posted by Atrueoriginall at 6:19 AM