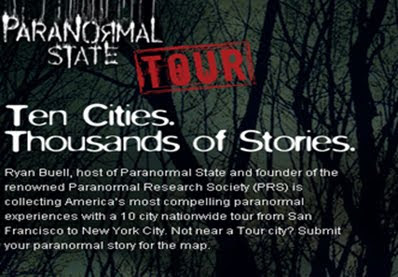 A&E’s hit series “Paranormal State” will kick-off a search for America’s most compelling paranormal experiences with a 10 city nationwide tour beginning in San Francisco on Monday, November 30 and ending in New York City on Friday, December 11. The series star, and founder of the renowned Paranormal Research Society (PRS), Ryan Buell is issuing a call-to-action and traveling across the country to invite America to share their own paranormal experiences with him personally. The most compelling stories will have a chance to be featured on future episodes of “Paranormal State”.

“Paranormal research has always been a passion of mine,” said Buell. “Since the launch of our A&E series, we’ve been getting thousands of calls from people wanting us to investigate their homes. Although we’d love to, we can’t possibly visit everyone. This is our effort to cover more territory, talk to more people and ultimately find answers to the unexplainable.”

Buell, and his right-hand tech specialist and PRS team member Sergey Poberezhny, will travel coast-to-coast in a branded “Paranormal State” tour bus, taking the show on the road and visiting fans in popular U.S. destinations to gather first-hand accounts of the supernatural.

The “Paranormal State” tour will travel through 10 major U.S. cities in 14 days, each city will have the team on-site for one day at key locations, often with a story of its own to tell. Beginning November 20, fans can log on to the interactive “Paranormal State” tour site and join the official “Paranormal State” Facebook Fan Page and Twitter feeds, all in advance of the tour. Throughout the tour fans can come to the tour location to meet Ryan, be videotaped on the tour bus sharing their paranormal stories, create a photo of themselves as a “paranormal investigator” to share with their friends, and receive “Paranormal State” branded giveaways. Fans not near a tour site can participate by submitting their stories online to www.ParanormalStateTour.com. A key feature online will allow fans to upload paranormal stories, which will then appear pinpointed on an interactive map, creating a real-time visual account of where in the U.S. paranormal activity occurs most. 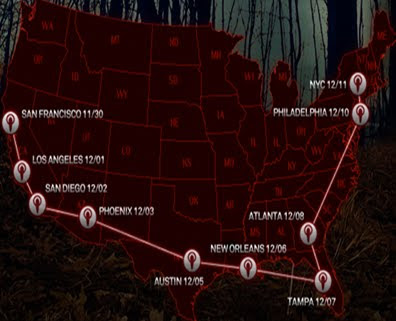 The “Paranormal State” tour will travel to the following major U.S. cities and locations:

Events will be open to the public from 10 a.m. to 5 p.m., with giveaways, prizes and the chance to tell your story to the series stars.

Posted by Atrueoriginall at 10:10 AM