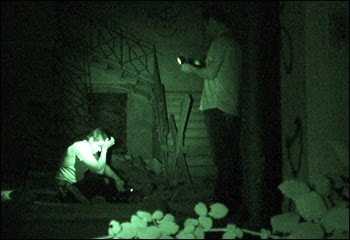 Poveglia Island, off the coast of Venice, Italy, is one of the world's darkest epicenters. According to legend, the island was formed from the ashes of burned plaque victims, criminals and mental patients who were exiled there. Tourists are forbidden from visiting the island, and local fishermen avoid it because they believe it's cursed.

In the South Lagoon between Venice and Lido sits the small Italian island of Poveglia that for centuries has been a refuge, stronghold, place of exile and a dumping ground for the diseased, dying and deceased. In 421, Poveglia welcomed its first inhabitants -- men, women and children who fled the barbaric invaders that had ravaged the mainland. Its relatively small size made the island defendable and not worth the trouble of invading armies. For centuries this small community lived in peace and avoided the laws and taxes of the mainland; their population dwindled however and by the 14th century, the island was once again abandoned. 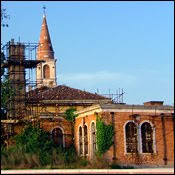 In 1348 the Bubonic Plague arrived in Venice and Poveglia, like many other small islands, became a quarantine colony. The Plague killed 1 out of 3 Europeans. Fearing the unbridled spread of the disease, Venice exiled many of its symptom-bearing citizens there. It was clearly a death sentence. At the island's center the dead and those too sick to protest were burned on giant pyres. This included the tens of thousands of Venice citizens dying on the mainland. These fires would burn once more in 1630 when the Black Death again swept through the city.

Long after the fires were extinguished, Napoleon's military campaign relied on the island's ghostly legends and defendable position to protect stores of gunpowder and weapons.

By the mid-20th century, the facility was converted into a geriatric center, which closed in 1975. Today, the entire island is abandoned; locals and tourists are prohibited from visiting, and fishermen steer clear of the accursed place.

Posted by Atrueoriginall at 11:36 AM

I Heard that Italy government have set this Island for sale? Of course no body is willing to purchase.
Is that sale is still available??