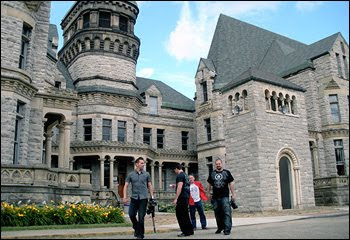 In its 96-year history, more than 150,000 criminals were confined to the towering cell blocks of the Ohio Reformatory. These inmates lived lives of violence and many met their deaths with equal brutality. Today, their evil spirits still prey on women, the elderly and the weak as they carry out their eternal sentences.

Ohio State Reformatory is the quintessential picture of a prison; in fact, it's been the backdrop for movies like "Tango and Cash," "Air Force One" and "The Shawshank Redemption." The cornerstone of this reform fortress was laid on November 4, 1886, on the site of the former Camp Mordecai Bartley, a training ground for Civil War soldiers. The local community and its political leaders enthusiastically campaigned for the building of the reformatory, mainly because of the boost it provided for the local employment rate and economy. 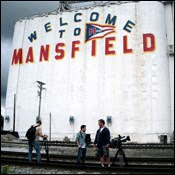 Upon its opening in 1890, the prison was an intermediate penitentiary, a facility where first-time offenders who were too violent for industrial schools could serve their time. Inmates were taught basic trades for release and reintegration into society. However, as prison populations swelled in the 20th century, the reformatory was forced to accept inmates convicted of more serious and violent crimes.

By the 1960s, the reformatory was getting crowded, and overpopulation breeds conflict and disease. At times, guards were even forced to double the occupancy in death row cells, which in at least one instance resulted in an inmate's death. During morning checks, guards noticed a prisoner missing from one of the cells; upon inspection, the prisoner's body was found broken and stuffed beneath the bunk. Instances like this one forced Ohio State Reformatory to close its doors in 1972.

While the prison's day-to-day operations were enough to cast a shadow over the site, there were certain events guaranteed to cause a spike in Ohio State's paranormal activity. In the late 1930s, a riot broke out in the East Cell Block. The guards condemned 120 rioters to share 12 solitary confinement cells for one week without food or water. This punishment drove many to the brink of madness and death.

During its 94 years as a working prison, 154,000 inmates passed through the gates of the Ohio State Reformatory. Many died of diseases like influenza and tuberculosis, some went mad, others hung themselves and at least one inmate lit himself on fire. Just outside the reformatory stand 215 numbered graves, a vivid testament to the harsh reality of prison life.

Posted by Atrueoriginall at 9:55 PM